Each year, my game design class at Nanakuli High School, has two gaming projects. The goal of the first project is to introduce the students to my project management style and as an ice breaker in the class. Namja Myeon is a product of our first project in 2016. The theme is a bit out-of-the-box. It was thought up entirely by students in the class. At that time, many of my students were really into K-Pop. They also were really into the game Tetris. Namja Myeon is an amalgamation of the both, then themed in the world of Juni Ito.

My students at Nanakuli Highscool: Brainstorming some initial Namja concepts (2016) 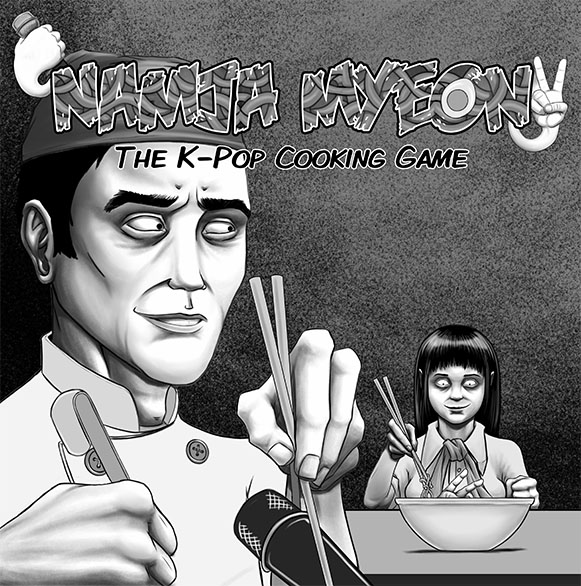 The Gugsu’s Goal in life is to have the most successful restaurant in town. The Gugsu’s special ingredient is K-Pop Boys diced and placed into each serving.  Secretly the Gugsu resents anyone attempting to devour his soup with his grade A ingredient.

However he realizes that he has to run a business and secretly desires to be the top cook.

The Gugsu’s goal is to get through an entire day without any fan girl getting completely full from a bowl of supuu. He accomplishes this by half heartedly adjusting each bowls ingredient, configuration, and thus preventing the “Perfect configuration”

The YeoJaaduel is the fan girl who wants nothing more than to devour a K-Pop star in a bowl of noodles (Supuu).]

The YeoJaaduel’s goal is to play card abilities to align the ingredients in such a way that she can easily devour a k-pop star. The first Yeojaaduel to devour three pop stars, she wins the game.

An example of a perfect conjunction

The Gugsu will be playing cards to prevent the Yeojaaduel's from creating the perfection conjunction.

The Yeojaaduel will be playing cards to rearange the bowl of noodles into a perfection conjunction. This happens when four seperard cards border color aligns.